This is the first time the ODM leader Raila Odinga is beating Ruto in an opinion poll conducted by TIFA.

ODM leader Raila Odinga is the most preferred Presidential Candidate in Kenya, an opinion poll by Trends and Insights For Africa showed.

The polls released by TIFA on Wednesday show Raila leads with 39 per cent of those polled backing him for the Presidency.

This is a 7 per cent increase from the last poll done by Tifa three weeks ago in which Raila had 31 per cent. 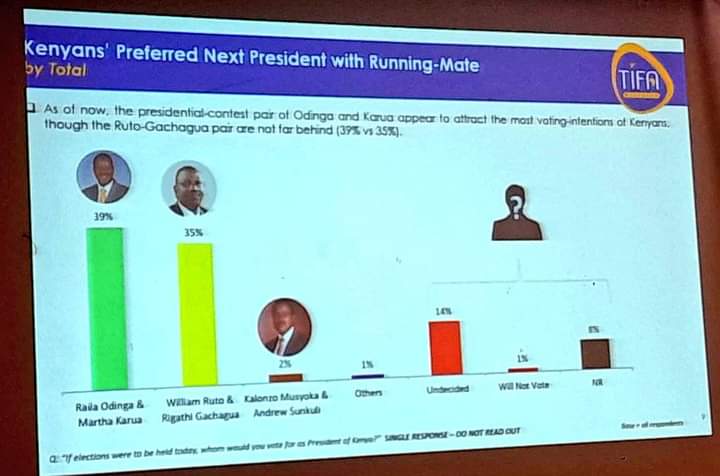 On the other side, Deputy President William Ruto's ratings have dropped by 4 per cent putting him at number two with 35 per cent.

In the past ratings, Deputy President William Ruto had 39 per cent.

This is the first time the ODM leader Raila Odinga is beating Ruto in an opinion poll conducted by TIFA.

In the same poll, Wiper leader Kalonzo Musyoka came in 3rd with 2 per cent.

On Political Parties, UDA is the most popular at 29 percent followed by ODM at 25 percent while Wiper is at 3 percent and 13 percent undecided.

UDA is most popular in Rift Valley with Central Rift at over 54 percent and South Rift at 55 percent while ODM is popular in Nyanza at 58 percent and Jubilee at 3 percent.

There is a slight decline in those undecided.

Azimio la Umoja has the largest number at 38 percent while 28 percent identified with Kenya Kwanza while OKA received the support of 3 percent.

In terms of political parties, almost all respondents said they fell close to ODM, of which 96 percent said they support Azimio

The Most Popular Coalition in Kenya - TIFA Poll