Uasin Gishu Governor Jackson Mandago and Kapseret MP Oscar Sudi were on Sunday involved in a heated exchange over who should contest for the county’s senatorial seat in 2022.

Speaking at a function in the county, Sudi urged Mandago to step down from the Senate race and campaign for Deputy President William Ruto or go for a national position.

According to Sudi, having served as governor, it is only appropriate that Mandago goes up the ladder and not vice versa, adding that the seat should be left for young politicians who have expressed interest.

“When you are an assistant chief, you move up to Chief, then D.O, DC… moving upwards not the other way round,” Sudi said in his local dialect.

Speaking at a different event in the county, Governor Mandago responded to Sudi, noting that he has no right telling him which seat to vie for. 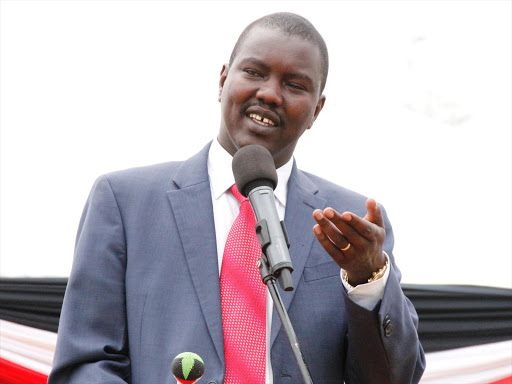 According to Mandago, Sudi should focus on Kapsaret and let Uasin Gishu residents decide who is best suited to serve them as Senator in 2022.

“The decision of who becomes a leader is made by the people, not an individual. Next time you see him talking about planning this county, tell him to focus his energy on Kapseret,” Mandago opined.

The exchange between Mandago and Sudi isa teaser of what is expected in the UDA party ahead of its 2022 nominations especially in Rift Valley where it is considered as the party to beat.